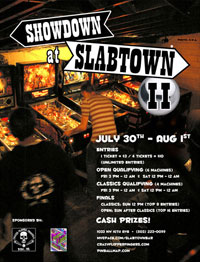 In my salad days I was a pretty decent pinball player. My little brother, Steve, however, was a master. We played in the late-90s era Portland Pinball League incarnation at the now defunct Jockey Club on Killingsworth, where Steve racked up a number of championships. I think I placed 3rd or 4th once. If Steve were not living in Elko, Nevada, he’d be at Slabtown this weekend. My excuse, on the other hand, is that I have virtually retired from pinball – I don’t hang out at bars enough anymore to get in any practice!

The Open Tournament is held on 6 machines. Play your games anytime Friday (3pm – Midnight) or Saturday (Noon – Midnight). According to the announcement on rec.games.pinball, the open tournament machines are Seawitch, Frontier, Whirlwind, Demolition Man, The Simpson’s Pinball Party, and Terminator: II. Finalists, the top 16 entries, will compete on August 1st after the Classics finals.

The Classics Tournament is held on 4 machines: Aces and Kings, Royal Flush, Solar City, and Aztec. Qualifying rounds take place same time as the open tournament above, while the finals, featuring the top 8 competitors, takes place at noon on Sunday, August 1st.

Prizes for this years event are cold hard cash! Entries cost $3 per ticket (4 tickets for $10), and you can enter as many times as it takes. The Crazy Flipper Fingers website has the rest of the details.