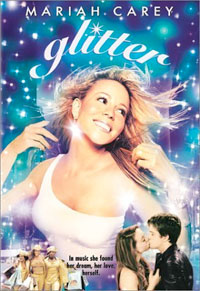 Host Will Radik will be joined by Michelle DeFord and Polly Pospisil to comment on the infamous Mariah Carey vehicle, Glitter!

Billie Frank is a shy, young mixed-race girl who is sent away by her alcoholic mother at a very early age. At an orphanage, she befriends Louise and Roxanne. Flash forward to 1983. Billie and her friends are spotted by a record producer, Timothy Walker, who wants them to sing backup for his latest pop-music discovery. But when super DJ Dice hears Billie’s incredible voice, he makes a shady deal with Timothy to get her out of that dead-end situation. Soon, Billie and Dice are making hits inside the studio, and falling in love outside of it. Eventually, the pressure of her newfound celebrity puts too heavy a strain on Billie, forcing her to decide what it is she really wants from Dice, and what she wants for herself.