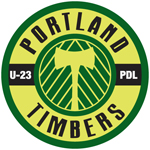 With their 19th win in a row the Portland Timbers U-23 took one step closer to both the perfect season (they’re 19-0-0 right now!) and the Premier Development League championship.

The Timbers beat Reading United AC 2-1 in the semifinal Friday to earn the right to face the Thunder Bay Chill in the championship match today, Saturday August 7 2010, at 4pm at PGE Park – tickets are cheap!. The match will also be broadcast live on Fox Soccer Channel.

Timbers U-23s to play for PDL championship Saturday at PortlandTimbers.com

Thunder Bay to Meet Portland in Final at USLSoccer.com

Timbers U-23 2, Reading United AC 1: Perfect season, championship just a win away for Portland at The Oregonian