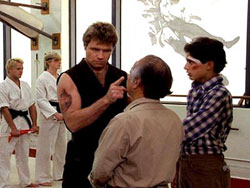 The movie is one I’ve never heard of: Laboratory.  It stars Martin Kove, who’s one of those actors I recognize, but couldn’t really tell you where I’ve seen him . . .

The Laboratory is the principal setting for this derivative sci-fier. A few cultures, left alone in petri dishes, begin spontaneously generating tiny and malevolent creatures. It all turns out to be the handiwork of predatory extraterrestrials. Once the lab mutations have reached maturity, they set about to take over the world. Camille Mitchell, Corine Michaells and Martin Kove (the bad dude from The Karate Kid movies) costar in The Laboratory.

Oh yeah, the evil coach from Karate Kid! (For the life of me I can’t find a photo from Laboratory, so I’ve illustrated this post with a shot of Martin Kove in The Karate Kid)