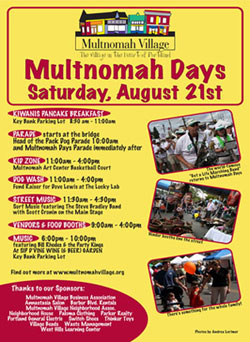 Start things off with the Kiwanis Pancake Breakfast at the Key Bank, from 8:30 until 11am ($6 for adults an $4 for kids 12 and under. Cash and checks). Meal includes pancakes, pork sausage, Starbucks coffee and juice.

At 10am the Head of the Dog Parade begins, followed by the Multnomah Days Parade.

From 11am until 4pm let the kids have free reign in the Kid Zone (now four times larger!) at the Multnomah Art Center, and take your dog up to the Lucky Labrador Pub for the 9th annual Multnomah Days Dog Wash, a fundraiser for Dove Lewis (suggested donation $10 per dog).

Surf music with the Steve Bradley Band and Scott Cronin will be featured on the Main Stage, and of course there will be plenty of vendors and food booths to browse.

In the Sip D’Vine Wine and Beer Garden listen to Bill Rhodes and the Party Kings from 6pm until 10pm.