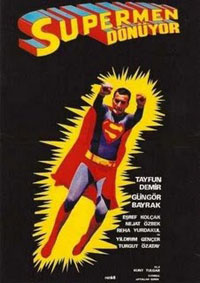 And you’re in for a treat. It’s a double feature!

Look out Joss Whedon! The Swedish have taken the future-western to a whole new level. I’m not exactly sure where that level is but… The only thing we really learn about the massive changes that took place between our time and the year 4000 is that aliens invaded Mexico. Also, there’s a character named Space Mahooney. It’s a good time.

And then, Turkish Superman!

The Return of Superman (the actual title of the movie known in the USA as Turkish Superman) opens by trying to convince us that an array of holiday ornaments is space, and a green glass bulb is The Planet Krypton. The “Fortress of Solitude” looks very similar to some caves we saw in Turkish Star Wars.