You know where I’ll be, but if you’re not a soccer fan there’re plenty of other fun things to do and see tonight. 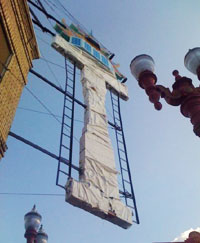 Portland’s recently restored Hung Far Low Sign will be re-revealed tonight, Thursday September 2 2010, at Ping (at the corner of NW 4th and Couch).

The sign was removed during the 2008-09 renovation of the Hung Far Low building, which now houses Ping Restaurant. Portland citizens rallied to restore the 2000-pound landmark, raising more than $8,600 through commemorative t-shirt sales, a website and special events. PDC closed the remaining gap with approximately $45,000 in grant funding. The total cost of the project – which includes removal of the sign, design and restoration work, and its re-attachment to the building, is estimated at $77,461.

The celebration begins at 5pm, and the official unveiling occurs at 7pm.

At 5pm the Portland Youth Philharmonic performs, followed by the Oregon Symphony at 7pm. The performance includes a scene from The Sleeping Beauty featuring dancers from the Oregon Ballet Theatre.

The traditional grand finale is a performance of Tchaikovsky’s 1812 Overture with a fireworks show, which includes shots from military canons from the Oregon Army National Guard 218th Field Artillery. [more]

Up in Northwest Portland

Right around sunset they then all together start swirling into the chimney, tens of thousands of them, where they roost for the evening. Meanwhile on the lawn below, hundreds of Portlanders gather with their lawn chairs and blankets and unruly children and stare at the sky, mesmerized by the swirling black pepper tornado. The crowd boos when a falcon gets lucky, and cheers when he’s thwarted. [more]

And over at PGE Park

The Portland Timbers host the Puerto Rico Islanders tonight in what will be the final USL Timbers game at PGE Park. The Timbers go on the road after Thursday for the last four matches of the season to allow renovation work on the park to prepare it for 2011 and the MLS. Home playoff games will be played elsewhere this year (Hillsboro Stadium and Merlo Field have been mentioned). [more]