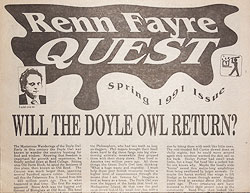 Back in the day (aka Old Reed™), as a fresh faced freshman, I was impressed with eccentricities expressed within its pages, and sometime the writing. When I learned that starting this year the Quest would be available online, I was nostalgically excited. Alas, the best stuff may not end up in the online edition. Nevertheless, stories of potential interest to Portlanders at large have already begun to appear, such as this story on TriMet’s fare increase, or this review of the Ship Ahoy Tavern.

Plus there is plenty of the frivolity one expects from The Official Organ of the Reed College Student Body, such as Excerpts from the Book of Scrounge, and 5 Songs to Bone To. Ah, college.

What would be even more interesting to me is an online archive of the Quest, a la The Oregonian’s. That will probably never happen, but the very first issue of the Quest, from January 16, 1913 is available online (PDF format). Highlights include Athletic Events to Keep Reed Men Occupied, Dr. Sisson Addresses Teachers’ Association, and ads for Meier & Frank’s and J. K. Gill’s. Now that’s some nostalgia.