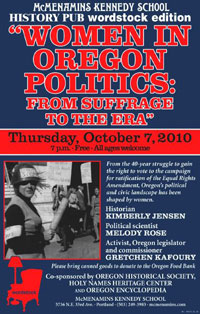 The topic of the Special Wordstock Edition of History Pub is Women in Oregon Politics: From Suffrage to the ERA. The presentation is free, all ages, and takes place at the Kennedy School Theater (5736 NE 33) at 7pm on Thursday, October 7 2010.

From the 40-year struggle to gain the right to vote to the campaign for ratification of the Equal Rights Amendment, Oregon’s political and civic landscape has been shaped by women. On October 7, historian Kimberly Jensen, political scientist Melody Rose and activist and former Oregon legislator and both county and city commissioner Gretchen Kafoury will tell the stories of the political challenges Oregon women faced and the victories they won at a special edition of History Pub.

Melody Rose is currently Vice Provost for Academic Program and Instructions at PSU, and founder and director of The Center for Women, Politics & Policy.

Gretchen Kafoury is a former elected official (Oregon Legislature, Multnomah County Commission and Portland City Council) and college professor (PSU) who currently works as a social activist and volunteer board member of the Housing Authority of Portland.