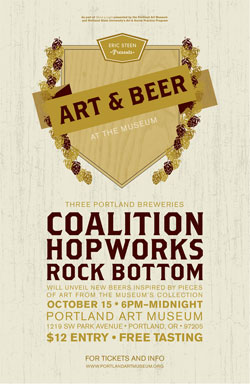 Artist Eric Steen has a knack for combining his passions, no matter how incongruous the combinations might at first appear.

Some of Eric’s past art projects include Drinking Beer With Friends and Working for PICA’s 2008 Time Based Art’s Festival, Good Beer = Good Times at Portland’s Igloo Gallery, and the first Art and Beer at the Museum, which took place last year. It was a success, and it’s back:

Art & Beer (2010) is the second event of it’s kind, brought to you by Eric Steen and the Portland Art Museum. Art & Beer combines beer, one of Portland’s most well known crafts, with experiencing art. For one night only, you can sample three new beers from Coalition Brewing, Hopworks Urban Brewery, and Rock Bottom Brewery at the Portland Art Museum. Each brewery received a tour of the museum’s collection, selected an artwork and will make a beer inspired by that artwork. The selected artwork and the beer style will remain a surprise until the night of the event. This beer sampling is part of a one night event called Shine A Light, an event that will host a number of performances, time-based art actions, music, and more. The entry fee for the event is $12 and will give you access to all the art and performances, the museums galleries, and unlimited sampling of the three new beers.

Entry is $12 and includes access to all the Shine A Light: A Night at the Museum events, collections and free beer samples.

More details are available here and at Beer And Sci-Fi.