This is the third edition of an occasional series of posts on the Best Portland Blogs You’re Not Reading.

Periodically I visit each of the blogs on my blogroll (which you’ll find just below the ads on the right). Many are popular and well trafficked, others are infrequently updated, but contain some gems. And then there are the ones that are almost always well written or entertaining, and routinely updated, but don’t get the traffic, I think, they deserve (I have some not so nefarious ways of determining this, e.g. open Sitemeter stats). 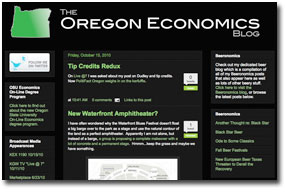 Wondering how to apply your college economics education to the mole problem in your backyard? The Oregon Economics Blog has you covered.

The blog, penned by Oregon State University economics professor Patrick Emerson, also comments on local, national, and international economic stories, reports, and issues. I’ve never taken a class in economics, but in his posts Emerson has a knack for explicating just enough of the economic theories pertinent to the subject matter on hand so that a layman like me can understand where he’s coming from.

I find myself disagreeing with many of his arguments, such as this one on Dudley and Tip Credits, but I get the impression he’s not making his argument because he’s a rich-pandering douchebag, but rather because he subscribes to a particular theory of economic order (sure a minimum wage is a “distortion” of markets, but it’s one of the very rare legally codified distortions that benefits the welfare of employees, rather than employers). I also vehemently disagree with his position on self-service gas, but my objection has nothing to do with economics. But I digress . . . Sometimes I lean towards agreeing with him, like this one arguing that maybe, just maybe, bicyclists in Portland could use a bit more regulation (I say this as a pedestrian, not a car driver): Bike-o-nomics: Of Social Norms, Externalities, Tipping Points and Bike City, USA.

Most of the posts are edifying and interesting, and the majority reflect on local issues, conditions, and discussions. If you’re interested in these sorts of things (and like to argue, but not in a trolly-way) go read The Oregon Economics Blog!

And being an Oregonian, naturally Patrick also writes occasionally about beer, at Beeronomics (which has an accompanying Twitter account, @Beeronomics, too!).