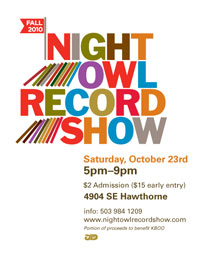 21 and over only. Admission is $2 (or $15 for the early bird entrance). Part of the proceeds benefits KBOO, Portland’s community radio station.

And on Friday, October 22 over at 3342 SE Belmont, Hall of Records, the boutique vinyl shop, cafe & bar specializing in soul, funk, jazz, latin, hip hop, deep funk and rare groove records [and one of our fantabulous advertisers!], is throwing a Night Before the Night Owl Party! The celebration features $2 PBRs and $3 Natian Honey Red Drafts from 8pm until closing, and all Night Owl Vendors receive a special 1/2 price discount on all sandwiches [which are all fantastic!]. Hall of Records will also be selling records at the Night Owl Record Show on Saturday night.