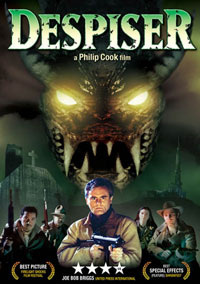 Join host Will Radik and guests at this special anniversary edition show as they provide commentary to accompany a crappy movie: Despiser!

Having just been fired and dumped by his wife, life couldn’t possibly be worse for independent artist GORDON HAUGE (Mark Redfield)–until he wrecks his car and finds himself in purgatory that is. Once there, he is attacked by fanatic Shadowmen and legions of Ragmen–souls being enslaved and bent to some dark purpose. Gordon is rescued by an eccentric band of freedom fighters, people from different times of history who lost their lives in noble sacrifice. They recruit the reluctant and befuddled Gordon and set off on a wild adventure through the surreal landscapes of purgatory to battle the Despiser–an evil being who now reigns in this seemingly God-abandoned halfway house north of hell and south of heaven. Dealing with shifting reality, annoying monsters, armies of Ragmen and hair-raising car chases across bridges spanning oceans of lava our heroes battle their way to the dark macabre fortress of the Despiser.