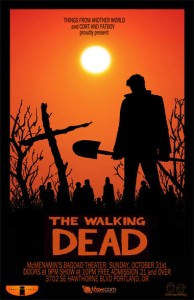 Join your hosts at the Bagdad Theater (3702 SE Hawthorne) for a special 90-minute series premier of AMC’s The Walking Dead:

Both before and after the show, which airs at 10pm, event co-sponsor Things from Another World will have on hand comics and graphic novels available for sale. Prizes will be given away during the screening, including one for the best Walking Dead-related costume!

Admission for this event is free, but of course you have to pay for the beer and pub food!