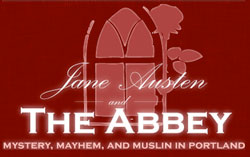 Jane Austin fans from throughout the world are gathering this weekend, October 29-31 2010, in Portland, Oregon for the annual Jane Austen Conference. This year’s focus is the first novel she completed for publication: Northanger Abbey.

“It is such happiness when good people get together—and they always do.” And it is with great happiness that the Oregon/Southwest Washington Chapter of JASNA welcomes the good people of JASNA for the 2010 AGM in Portland. It will take place over the Halloween weekend (October 29-31), very fitting as this AGM will feature Northanger Abbey. The theme is “Jane Austen and the Abbey: Mystery, Mayhem and Muslin in Portland.”