This is the fourth edition of an occasional series of posts on Oregon Blogs You Should Be Reading . *

Periodically I visit each of the blogs on my blogroll. Many are popular and well trafficked, others are infrequently updated, but contain some gems. And then there are the ones that are almost always well written or entertaining, and routinely updated, but don’t seem to have the profile they deserve – those are the blogs I’m highlighting in this series. 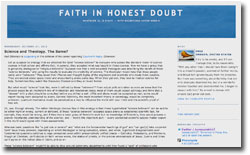 This is one of the most thoughtfully written blogs I’ve stumbled across in all my years of following local blogs. Dale Smith (who you should also follow on Twitter: @bureaucrat117) holds forth on sundry topics and themes; running, politics, god [or lack thereof] stuff, science, and Mad Men, to name a few, all covered intelligently, with just enough, but not too much, snark.

I really can’t do Dale’s posts justice by describing them, just go read his blog! On the right sidebar of Faith in Honest Doubt there’s a view random post link, which on most blogs wouldn’t have much value. On Faith in Honest Doubt, it’s a near certainty it will uncover a nugget worth reading.

* The first three posts in this series were actually posted under the title Best Portland Blogs You’re Not Reading, but it was pointed out to me that the phrasing could be taken as a gibe at the bloggers, whereas it’s the readers I’m trying to spur to action. Anyway, I took the advice of the person who brought this unintended interpretation to my attention [i.e. my wife!], and reworked the title a bit.