The Architectural Heritage Center (701 SE Grand) is offering free admission for the entire month of December, 2010.

The Architectural Heritage Center’s mission is to preserve the historic character and livability of our built environment, and to promote sustainability through the re-use of period homes and buildings.

Owned and operated by the non-profit Bosco-Milligan Foundation, we empower people in the Portland region to preserve both landmark buildings and the regular vintage homes and storefronts that collectively define our neighborhoods, culture, history, and quality of life.

On exhibit until December 31 is the annual juried art exhibit, the theme of which for 2010 is Fostering Harmony: The Symbiotic Relationship of Architecture and Nature.

The center is hosting an artist reception this first Friday, December 3rd, from 6pm to 8:30pm, and other community conversation later this month, which are also all free and open to the public.

National Geographic is holding a Warehouse Sale at the Convention Center (777 NE MLK Jr.) on Friday, December 3 through Sunday December 5.

“This year’s sale is one of the largest ever. We have more than 600 different products — that’s 200,000 of the best-quality books, maps, DVDs, toys, travel accessories and gifts from around the world,” said Bill O’Donnell, National Geographic’s director of sales, publishing.

Books are discounted 20-90%, and custom prints, and educational materials will also be available.

Admission is free! The sale hours all three days are 9am until 5pm.

The expansion draft dust has settled, for a little while at least. These are the guys:

Read Zaggy‘s guest commentary at Dropping Timber for a good analysis of the remaining Timbers from this list, how their salaries stack up, and some speculation as to what’s next for the Timbers.

December 2010 looks to be, perhaps, the most exciting December in recent Timbers history. The Kit Unveiling takes place next Thursday, December 9 [I’ll be in attendance, taking photos, tweeting, and ultimately blogging about it]. Meanwhile the PGE Park renovation continues apace. And don’t forget Timbers Army First Thursday on Thursday, December 2!

Then the 2011 MLS SuperDraft takes place on January 13. The Timbers pick second in the first round, after the Whitecaps. I expect John Spencer and Gavin Wilkinson have more trade shenanigans up their sleeves.

I know I’m not alone, as a long time Portland Timbers fan, in being utterly ignorant of the MLS. So I’ve actually been finding the Portland Timbers website MLS 101 News section to be edifying. Recent posts include Derby Cups, which reveals that the MLS features some legitimate rivalries, soon to include the reconstituted Cascadia Cup, the biggest derby cup, in my humble opinion, of them all! 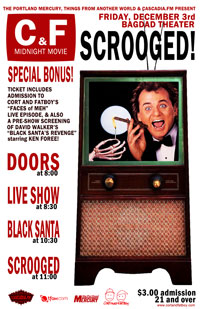 Come on out to the Bitter End Pub (1981 W Burnside) on Thursday, December 2 for the Timbers Army First Thursday.

To put it plainly, holiday shopping is a drag. The lines, the endless quest for parking, the untold sums from your wallet…if only you had a place to go to, where you see happy smiling faces, there are drinks all around, and endless discussions about MLS 2011.

That heavenly place exists, at the Bitter End Pub. Come one and all to First Thursday on December 2nd. There will be happy hour prices on food until 10 PM, and a few drink specials will be available to107ist members with their 107ist card.