Sure, you could spend the day fighting your way through obnoxious department stores crowds, or sitting on the couch watching football, but if you want some culture, follow me . . .

In celebration (?) of Black Friday, the Portland Art Museum is offering free admission today from 5pm until 8pm.

“Browse the Museum’s permanent collection, explore sculptures, paintings, and works on paper by one of the Pacific Northwest’s most distinguished artists, and see one of the most important examples of 19th-century American painting.” [more]

Rudolph Gets His Red Nose on Friday at Willamette Week Online

Old Town’s “Made in Oregon” sign, now the “Portland, Oregon” sign, will illuminate downtown once again starting this Friday after a two-year battle between the University of Oregon and the City of Portland for control of the sign.

At Friday’s ceremony to christen the new version of the old sign, city officials will also turn the white stag’s nose red, temporarily turning the deer into “Rudolph” for the winter shopping season … er, Christmas. [more]

One of the pioneers of artisan alcohol production in Portland, Clear Creek Distillery (2389 NW Wilson), opens their doors on Friday and Saturday, November 26 and 27 2010 for a rare open house.

Clear Creek’s Williams Bear Brandy and Apple eaux de vie are two of my favorite spirits. If I get up the gumption to leave the house and brave the consumerist frenzy [doubtful] that is the weekend after Thanksgiving, Clear Creak Distillery will be my first (and perhaps only) stop. [more]

Where to Watch the Grey Cup in Portland

Visit the Pittock Mansion during the Holidays

The Pittock Mansion has been closed the last few days as volunteers, designers, and local charities prepare it for the holidays. On November 22nd the public is invited in again to share in A Northwest Christmas: The Natural Beauty and Bounty of Oregon. The mansion will have been transformed into a holiday wonderland. Festive decorations, ribbon, garland, poinsettias, and more than 15 Christmas trees will fill the historic house. [more]

And for more, visit Around the Sun, Blogging Portland on the Cheap, and PDX Pipeline!

In celebration (?) of Black Friday, the Portland Art Museum is offering free admission today from 5pm until 8pm.

Browse the Museum’s permanent collection, explore sculptures, paintings, and works on paper by one of the Pacific Northwest’s most distinguished artists, and see one of the most important examples of 19th-century American painting. Also, check out our unique selection of gifts available in the Museum Shop to get a head-start on your holiday shopping.

(Actually, since July 2009 the museum has offered free admission every fourth Friday, so the Black Friday connection is just a coincidence).

Gavin Wilkinson and John Spencer were busy all morning drafting players in the MLS Expansion Draft. They spent the afternoon moving players through trades, leaving just seven of the ten drafted players still under the Timbers’ name. The biggest news of the day was Portland’s trade of top pick Dax McCarty to DC United for young defender Rodney Wallace and a fourth round SuperDraft pick. Rumors are swirling that the Timbers have a major international central midfielder close to a deal, so moving McCarty, the most coveted player in the draft, clears room for that move. [more]

Yesterday was a big day in Timbers history, and possibly the the wildest in terms of transfers, as the Timbers drafted two players who seem to have their bags packed, and drafted 3 others only to send them packing. The Timbers also selected five young and experienced players who will see playing time next year. The roster now stands at eleven and the hunt for talent continues. [more]

He’s signed, sealed and all but delivered to Mexico’s UANL Tigres, but that didn’t dissuade the Portland Timbers from taking a chance on Chivas USA captain Jonathan Bornstein.

The Timbers, one of two clubs joining Major League Soccer next season, selected Bornstein (Los Alamitos/Los Alamitos HS and UCLA) with the 15th selection in Wednesday’s 20-player expansion draft, no matter that the left back/midfielder is beginning a four-year contract in January with Monterrey-based Tigres. [more]

Nimo not Subject to Draft-Exclusion! at Prost Amerika Soccer

Real Salt Lake’s Alex Nimo was one of seven players waived by their clubs late on Wednesday night. Because he does not meet the age and service requirements to participate in the Re-Entry Draft, he is now available to sign a new contract with any MLS club on a first-come, first-serve basis.

Including Portland where he has played most of the last two years. [more]

The MLS offseason began in earnest as the final whistle blew on the MLS Cup in Toronto on November 21, but the existing clubs knew the winter months were going to be anything but slow. With two new clubs joining the fold for 2011, the Portland Timbers and Vancouver Whitecaps, MLS was hosting an expansion draft to help the new clubs populate their roster. [more]

The Portland Timbers’ dizzying day of draft and trades by Geoffrey C. Arnold at The Oregonian

The Portland Timbers did the expected and the unexpected during a flurry of trades and deals surrounding the 2010 Major League Soccer expansion draft Wednesday.

Not surprisingly, the Timbers used the first overall pick to select midfielder Dax McCarty from FC Dallas. But two hours later, the Timbers then turned around and traded McCarty to D.C. United in exchange for midfielder Rodney Wallace and a fourth-round draft choice in the 2011 MLS SuperDraft January 12. [more]

Oregon from Steve Allen on Vimeo.

I don’t know much about this one except that it’s by Steve Allen. Crane and helicopter shots of downtown Portland, bridges, etc. 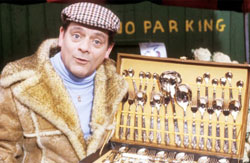 Personally I don’t find it that difficult to avoid the ubiquitous downtown canvassers. I just ignore the proffered hand, cute smiling plea or trick question and keep walking, and if necessary I side step the perpetrator [obstructing the sidewalk is a crime, right?!].

But recently in the Portland Spectator, a student publication at Portland State University, writer Erica Charves came up with whole bunch of suggestions in her Top 10 Ways to Avoid Canvassers:

10. Pretend to use your cell phone or motion to your ear as if you were wearing a hands-free set.

9. Make conversation with a friend regarding something very important. “So, if the heart transplant isn’t available, how long does the vet think your parrot will live?”

8. Wear headphones as you walk between classes—the giant headphones which cover your entire ear and stick out two inches. If you’re wearing these, there’s no mistaking you’re into your iPod.

Read the rest of her suggestions in Crouching Canvassers, Hidden Motive. The article also looks into how the canvassing business works for the organizations involved, and even describes a few street solicitors straight out of Only Fools and Horses, which I was unaware worked the streets of Portland.