Our first stop this Tuesday is the Portland Timbers website where we learn about yet another draft, the 2010 MLS Re-Entry draft. Stage 1 takes place on Wednesday, December 8, followed on Wednesday, December 15 with Stage 2. All MLS clubs, including Portland and Vancouver have picks. In both stages Vancouver picks 17th and Portland picks 18th. If you’re fascinated with this stuff, the details are available. If you just want to know what options Portland has, read mao’s analysis.

The other Timbers events this week are the kit unveiling, which takes place on Thursday, and the opening of the Portland Timbers Downtown Team Store on Friday, the 10th. 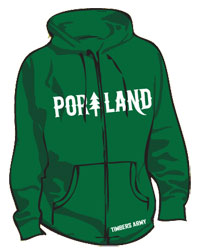 Meanwhile the official team online store is already open, as is the Timbers Army online store. From the latter, check out the new limited edition options, including the kick ass hoodie pictured to the right.

Dropping Timber‘s ongoing Better Know a Timber series introduces us this week to Peter Lowry, the attacking midfielder the Timbers plucked from the Chicago Fire in the expansion draft.

In The Oregonian Geoffrey C. Arnold writes about two recent Timbers acquisitions, Jeremy Hall and Rodney Wallace, who won the national championship with Maryland in 2008. Here’s hoping their college era chemistry translates to the MLS Timbers.

And at OregonLive Kip Kesgard considers this a historic week.

And finally, there’s a newish Timbers blog in town worth checking out: Chopping Timbers: Opinionated Portland Timbers News. I imagine it will be the first of many new Timbers related sites to sprout up as the MLS Timbers kick off their first season in 2011.