Los Angeles Galaxy’s longest tenured coach has been brought to Portland to be John Spencer’s assistant coach. Trevor James had been with the Galaxy since 2006 and since 2007 was the club’s Director of Player Development, overseeing LA’s academy system. Clearly this is a move by the Timbers to signal both their continued commitment to have MLS veterans in the coaching ranks as well as an important first (public) step toward the creation of a Timbers academy. [more]

Spencer kept two assistants from former head coach Gavin Wilkinson’s tenure and added one of his own.

The Portland Timbers introduced four of their most recent player additions to the team’s Major League Soccer roster Wednesday.

Portland fans received their first look at midfielders Adam Moffat and Peter Lowry, along with defenders Rodney Wallace and Eric Brunner. The four were among the seven players the Timbers acquired after a flurry of expansion drafts and trades two weeks ago. [more]

Lebron isn’t the only Ohio pro athlete who’s saying goodbye to their hometown team this year. If you haven’t heard, Eric Brunner is bringing his talents to the Rose City.

Brunner is a a 6’4 defender who grew up in Dublin, Ohio, and also played his college soccer at Ohio State. After spending his freshman year at the University of Maryland, Brunner became a Buckeye and would go on to be a 1st team All-Big Ten selection his junior and senior seasons, as well as a 1st team All-American his senior. [more]

Zea and his team have overseen product development and uniform design for all 18 Major League Soccer teams, including two — the Portland Timbers and Vancouver, B.C., Whitecaps — that will join the league for 2011 season.

The Timbers’ jersey and uniform, which will be unveiled today, have occupied the Adidas America staff more than any other MLS uniform.

“We certainly don’t want to play favorites,” Zea said, referring to other MLS client teams, “but it is our hometown team.” [more]

So What Do You Think of The New Timbers Billboards? by Marjorie Skinner at Blogtown, PDX

By now you’ve probably seen some of the new billboards that’re stirring up interest in the 2011 MLS-ified Timbers, the work of former W+K ad director Jelly Helm . . .

MLS Soccer.com just published a piece today on the campaign, which notes that three are up so far, and there are 12 more in chute (including one that features someone I once dated, briefly, a looooong time ago, and no it isn’t Timber Jim). [more] 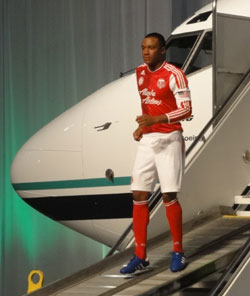