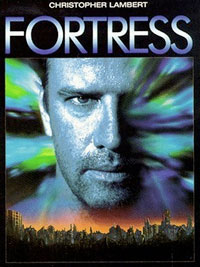 Elements of Orwellian science-fiction and old-fashioned prison dramas are combined in this futuristic action film, as an unjustly imprisoned couple attempts to escape from a high-tech jail known as The Fortress. The Fortress is the tool of a repressive government, an imposing, computerized hell, featuring lasers for cell bars, robot guards, computerized brainwashing, and the like. Still, some things never change, including the presence of an evil warden, who harasses the pretty wife while her husband frantically searches for a way out. The special effects and design work are effective, particularly in comparison to the film’s modest budget, but the story will undoubtedly seem disappointingly predictable to many viewers. Nevertheless, the film’s blend of competent (if unoriginal) action and technology proved enough of a draw to make the film a financial success internationally, though it received little notice in the United States.