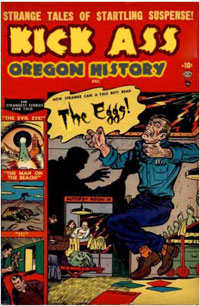 Kick Ass Oregon History, the latest series of podcasts from the enthusiastic historians behind ORHistory.com debuted on March 1, 2011 (episode 1 is available here: The Roseburg Blast).

Another episode dropped today, March 15, 2011: Kick Ass Oregon History Vol 1 #2: The Eggs!, about the 1942 poisoning at the Oregon State Hospital for the Insane.