Ecoroofs aren’t just for hippies, dainty environmentalists, and real estate developers. If you want to learn more about how they work, and maybe even put on your own structure (high rise, house, food cart or chicken coop!) go check out Ecoroof Portland 2011 on March 18 (10am to 6pm) at the Oregon Convention Center (777 NE MLK Jr. Blvd). [more] 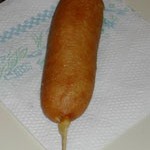 Invented by two dudes from Corvallis 19 years ago when a 24 pack of corn dogs was discovered in their freezer while they were watching the first day of the NCAA basketball tournament (four basketball games in a row on the same channel!), National Corndog Day 2011 takes place Saturday, March 19.

Corndog Day is now a national secular holiday, with a website, a wikipedia page, and even corporate sponsors. And this year it’s official (in Oregon at least)! [more]

The winter hiatus is over! The Portland Farmers Market returns to the Park Blocks at Portland State University (SW Park & SW Montgomery) on March 19, 2011.

At each stop different regional brewers will be serving and discussing their Cascadian-brewed beers. Twenty five Oregon breweries are taking part in this year’s event. [more]

The Portland Timbers start the 2011 season on the road this Saturday, March 19th, when they face the defending Major League Soccer champion, Colorado Rapids.

You could watch the match on ROOT, Fox Soccer Channel, or listen to the play by play on KXL 750. But what you should do is join the Timbers Army [more]

Four Play is the star of the show; it’s a Belgian-y beer based on Upright’s wheat beer (Four) that is pinot noir barrel-aged for a year with cherries, souring yeasts, and bacteria. [more]