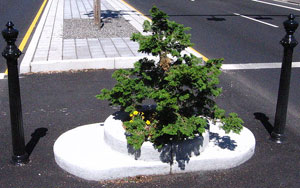 What’s most remarkable about this park is the story of its origin, oh, and its diminutive size. Mill Ends covers an area of 452 square inches, about 2 feet square. Mill Ends Park is the smallest park in the world.

Oregon Journal columnist Dick Fagan wrote a popular column called Mill Ends, covering whatever whimsy he could conjure up. In 1946, from his office window overlooking Front Avenue (now Naito Parkway), he spotted a 2 square foot hole in a raised bit of concrete in the median. A light pole was, presumably, intended for the spot, but was never installed. Fagan invented stories of leprechaun exploits in the tiny “park.”

One story, described in the Oregon Encyclopedia entry for Mill Ends, addresses the park’s origin:

One day, as Fagan told the story, he looked out his window and saw a leprechaun digging in the hole. Fagan ran downstairs, dashed across the street, and caught the leprechaun. According to Irish lore, if you catch a leprechaun, he has to grant you a wish. Fagan wished for his own park, but he never specified where or how big the park should be. The leprechaun granted his wish and gave Fagan the hole in the traffic median as his own personal park. Fagan named the spot after his column.