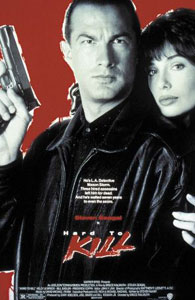 The film this week is the Steven Seagal classic Hard To Kill:

Mason Storm, a ‘go it alone’ cop, is gunned down at home. The intruders kill his wife, and think they’ve killed both Mason and his son too. Mason is secretly taken to a hospital where he spends several years in a coma. His son meanwhile is growing up thinking his father is dead. When Mason wakes up, everyone is in danger – himself, his son, his best friend, his nurse – but most of all those who arranged for his death.

Join Will Radik and colleagues as they skewer extraordinarily skewerable films.