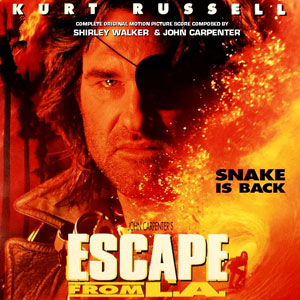 This week’s film is the 1996 aging-Kurt Russell vehicle, Escape from L.A.:

The year is 2013 and Snake Plissken is back from Escape From New York. An earthquake has separated Los Angeles from the mainland. In the New Moral America, all citizens not conforming to the new laws (no smoking, no red meat, no Muslims in South Dakota) are deported to L.A., now a penal colony. The President’s daughter has stolen a doomsday device and has fled to L.A. It’s up to Snake Plissken to find the President’s daughter and retrieve the doomsday device before its too late.