The Mystique of Terroir: Geology, Soils, Climate and Wines in the Northern Willamette Valley is the topic of the latest OMSI Science Pub, which takes place Monday, May 2, 2011:

Scott Burns, PhD, is a professor of geology and past Chair of the Department of Geology at Portland State University where he has been for nearly 20 years. Scott specializes in environmental and engineering geology, geomorphology, soils, and Quaternary geology. In Oregon, he has projects involving landslides and land use, environmental cleanup of service stations, slope stability, earthquake hazard mapping, the Missoula Floods, paleosols, loess soil stratigraphy, radon generation from soils, and the distribution of heavy metals and trace elements in Oregon soils and alpine soil development. He has won many awards for outstanding teaching including the Distinguished Faculty Award from the Portland State Alumni Association in 2001 and the George Hoffmann Award from PSU in 2007. He has authored over 90 publications and has had over 25 research grants. He actively helps local TV and radio stations and newspapers bring important geological news to the public and, for the past 40 years, he has been studying wine and terroir—the relationship between wine, soils, geology, and climate.

This science pub takes place at the Bagdad Theater (3702 SE Hawthorne) from 7pm until 9pm, but arrive early (5pm doors open) to secure your beer, grub, and a seat! There’s a $3.00 suggested donation/cover charge. Minors with adults are welcome, otherwise this event is 21 and over. 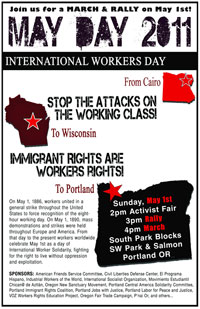 It’s May Day, so you know what that means!

Well, for most Americans in means just another day to meekly report to work and grovel for a paycheck (or a day to spend recovering from said groveling if you have Sundays off).

But in the rest of the world, and yes, even for some Americans, May Day belongs to the People. And this being Portland, of course there will be a rally.

May 1 has been the traditional day of international worker solidarity since 1890, when American and European workers held mass demonstrations to commemorate the May 1, 1886 U.S. general strike that won American workers the eight-hour day.

Today, from revolutionaries in Cairo, to protesters in Wisconsin, to day laborers in Portland, workers are continuing to struggle for their rights.

On May 1, 2011, join workers around the globe in celebrating International Workers’ Day with a march against the attacks on the working class and immigrants.

The Portland Timbers return to the scene of their first two (and, ahem, only) MLS wins today to face Real Salt Lake. Kickoff at Jeld-Wen Field is 7:30pm.

Real Salt Lake, coming off a tough loss Wednesday in the CONCACAF Champions League final, are 4-0-0 in league play on the season – currently good for 2nd place in the standings despite playing literally half the number of games of the league leading LA Galaxy. Portland is 6th in the standings with a respectable (for an expansion team) 2-3-1 record.

Of course Portland has not lost or even drawn at home yet, due to inspired team offense and just enough defense. Against Real Salt Lake, probably the best team faced in this young inaugural season, the Timbers will need to play inspired defense as well. 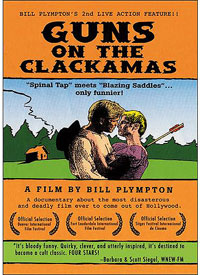 Animator Bill Plympton was born in Portland, Oregon on April 30, 1946. He graduated from Oregon City High School and attended Portland State University, where film became his obsession. At PSU he edited the yearbook and joined the film society – it was for this film society that he first attempted animation, making a yearbook promo that was accidentally shot upside-down, rendering it totally useless.

He moved to New York City in the late 1960s where he lived and worked as an illustrator and cartoonist for 15 years, and began animating short films. The short Your Face garnered Bill a 1988 Oscar nomination for best animated short, and his animation and film career took off. MTV and advertisers featured his animated shorts, and The Tune, his first feature length film, was critically well received.

More recent work includes the live action Guns on the Clackamas, a behind-the-scenes look at an imaginary disastrous Western, much of which was shot in Oregon, and Walt Curtis, Peckerneck Poet, wherein Portland poet Walt Curtis is followed around town as he reads poems.

Idiots and Angels, an animated film, is his most recently released feature.

The Africa Savannah exhibit opened at the Washington Park Zoo* on April 29, 1989:

The exhibit replicates the dry, open plains of East Africa. Familiar African animals such as giraffes, zebras, hippos and rhinos live along riverbanks and water holes. DeBrazza’s monkeys and colorful African birds play in the trees. Visitors walk through a large glass-enclosed aviary, down a safari path and up onto an overlook where they can gaze out over the savanna.

* The zoo’s name officially changed to Oregon Zoo in 1998.