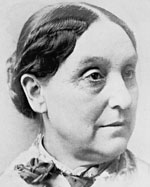 A conference on Suffrage held in Portland on April 4, 1906 attracted many prominent suffragists, including Abigail Scott Duniway, who addressed the group on the topic of “Marching on to Victory.”

Scores of suffragists from throughout the state gathered, preparing for the June 1906 election when they hoped to gain the legal right to vote. Alas, the cause garnered only 44% of the vote that year. They would have to wait until 1912, when Oregon would finally join its neighboring states in permitting women to vote.