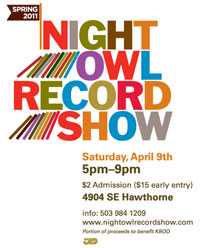 21 and over only. Admission is $2 (or $15 for the early bird entrance at 3pm). Part of the proceeds benefits KBOO, Portland’s community radio station.

Then after the show head on over to Hall of Records (3342 SE Belmont), your SE Belmont vinyl shop and bar, for an an afterparty featuring beers, beats & eats and Djs Christian Science and David James from Seattle’s monthly soul and funk dance party DUG.