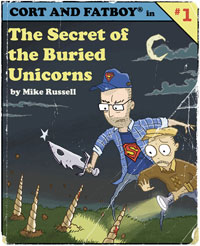 Join David Walker and Mike Russell at Bridge City Comics (3725 N. Mississippi) on Wednesday, April 13, 2011 as they celebrate the release and sign copies of their latest books.

A life-long fan of comic books and movies, I decided to write the sort of book that I wanted to read when I was a teenager, but couldn’t seem to find. Darius Logan: Super Justice Force is that book. It is the story of an ordinary kid living in an extraordinary world of superheroes, and finding the strength within himself to be a better person than he ever imagined possible.

Cort and Fatboy and the Secret of the Buried Unicorns stars Portland podcasters Cort and Fatboy in a tale of Danger & Adventure in the Media Wasteland:

The boys are running out of money — but then they remember that Portland, Oregon is built on a unicorn burial ground. With the unpaid help of their regular guests — including Walker and Russell — can the boys exploit this fact and make the rent?

And Beware the Sabre-toothed Vampire collects Season One of Russell’s webcomic about a tiny vampire hampered by his giant fangs.

The party goes from 6pm to 8pm.