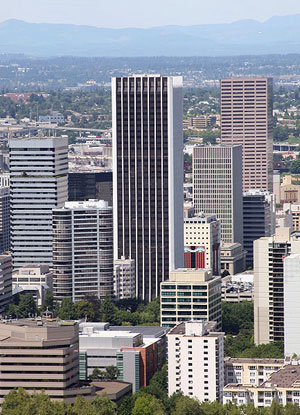 Originally called the First National Center, the Charles Luckman Associates-designed building was constructed for $40 million dollars. When it opened the first 21 floors, plus the five stories of the adjacent (via sky bridge) data processing plant building, were occupied by the First National Bank (about 1500 employees at the time). Bank president Ralph J. Voss and Governor Tom McCall spoke at the dedication ceremony.

* Though often touted as such (notably by Chuck Palahniuk in Fugitives and Refugees), the US Bankcorp Tower, aka Big Pink, is not the tallest building in Portland. It’s #2, about 10 feet shorter than the Wells Fargo Tower. Big Pink does, however, have more stories, and certainly appears taller as it’s immediately surrounded by shorter buildings.