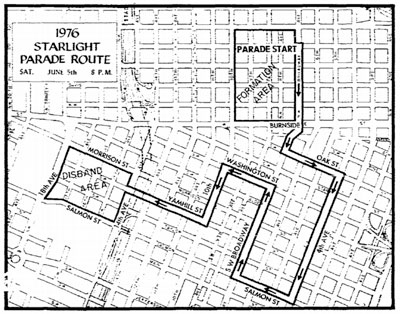 After a four year absence* the Portland Rose Festival featured a new nighttime parade on June 5, 1976: the Bicentennial Starlight Parade (The Oregonian, 24-March-1976).

The grand marshals of the parade were swimming star Kim Peyton and University of Oregon basketball All-American Ron Lee (The Sunday Oregonian, 6-June-1976).

Brass bands, drill teams, illuminated floats, a Chinese lion and one miniature train threaded their way through the streets of downtown Portland Saturday night in the Bicentennial Starlight Parade before tens of thousands of delighted spectators

The extravaganza, the first of three parades that will highlight the 1976 Rose Festival, wound some 35 blocks from the North Park Blocks to SW 14th Avenue and Yamhill in about 45 minutes.

The rain (of course it rained!) didn’t start until the parade was about half over.

* In 1973 the Rose Festival association eliminated the traditional nighttime “Merrykhana Parade,” which dated from 1925, when organizers deemed it too unruly (The Oregonian, 23-January-1973). During the 1972 event “young rowdies” dumped water on and threw water balloons at spectators and participants (The Oregonian, 8-June-1976).