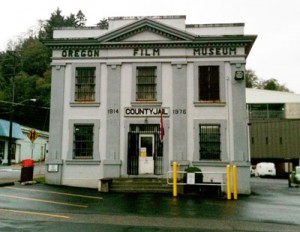 The Goonies opened in theaters on June 7, 1985. The Oregonian film reviewer Ted Mahar’s description of the film appeared in the paper that day:

“Goonies,” is a whizzingly paced adventure comedy about eight misfits who have the time (and fright) of their lives when one of them literally stumbled across a pirate treasure map. But while pursuing the treasure, they are also fleeing two cretinous bandit brothers and their gun moll mom through a dangerous maze of caves.

Personally I would describe the film as “eight pre-teens screaming for two hours,” but apparently I’m in the minority with my distaste – the $20 million Spielberg-produced film grossed over $60 million.

Partly filmed in and around Astoria and Cannon Beach, The Goonies really hit a chord with a lot of people (i.e. pre-teens), and is celebrated to this day on the North Coast. In fact Astoria threw a Goonies 25th Anniversary Celebration in 2010, and Mayer Willis Van Dusen has declared today, June 7 to be Goonies Day in Astoria, Oregon. So, uh, happy Goonies Day!