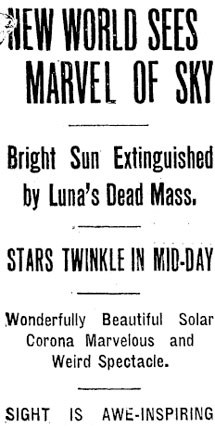 The path of the solar eclipse of June 8, 1918 touched the southwest corner of Washington before tracing a line across the state of Oregon on its way across the continent, heading out over the Atlantic after crossing the Florida peninsula.

The U.S. Naval Observatory received a special grant from Congress to observe the eclipse from the eastern Oregon town of Baker (now known as Baker City).

Baker, the Oregonian reported on February 2, 1918, was determined by the Government as the best point to view the eclipse. Of the other cities and towns the eclipse would pass over, including Canton, Mississippi; Dodge City, Kansas; Denver, and Pocatello, Baker was deemed the most advantageous point for observation, because the eclipse zone will pass directly through the center of the city, and Naval observatory officials believed the climatic and atmospheric conditions prevailing at Baker (i.e. low probability of cloud cover) would be ideal for observation of the eclipse (Oregonian, 15-March-1918).

Below are several excerpts from the Oregonian coverage from Baker published the day after the eclipse:

When the moon this afternoon on schedule time darkened the face of the sun for a period of one minute and 53 seconds persons in the path of totality of the eclipse enjoyed or suffered all the many thrills and sensations which tradition connects with the heavenly spectacle. In the weird darkness of mid-afternoon, observers marveled, feared or experienced a combination of emotions indescribable, as the phenomenon affected them.

The scientists, as they emerged from their buildings and tents after the eclipse, were pleased, indeed, as they realized that their weeks of preparation had not been in vain, and that they had not made a long journey and set up a carload of atronomical instruments without result.

Eclipse Day was made the occasion for a half holiday in Baker, stores and business places closing for part of the afternoon, and mills allowing employees half a day off, so all might take full advantage. Practically everyone had prepared smoked glasses, as advocated by Government astronomers, to witness an event that will not come to Baker again for 250 years.