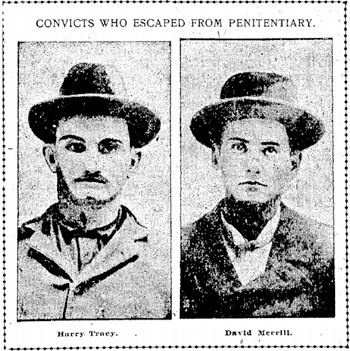 After killing three guards, the fugitives made good their escape and touched off a massive Northwest manhunt of three months’ duration. Salem’s daily papers kept up a running account of sightings, false leads, reports from authorities, warnings, and criminal histories of the two escapers. Merrill’s body was found late in June. Tracy was finally cornered in Washington and shot in August. Both were returned and buried in the prison cemetery.

But for a longer, and more interesting, history check out Slabtown Chronicles: Harry Tracy: The Mackintosh Bandit