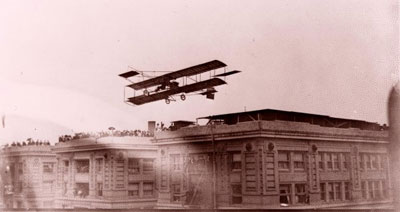 Having announced in May that he would fly a plane off the roof of the Hotel Multnomah (now the Portland Embassy Suites) during Rose Festival, pioneering bird-man Silas Christofferson made it clear he would not back down. I have every confidence in myself and will make the flight promptly at 2 o’clock Tuesday afternoon just as surely as weather conditions are at all favorable (Morning Oregonian, 10-June-1912).

The 23 year old Christofferson, a native of Watsonville, California, began his aviation career in 1910 when he constructed his own plane, a monoplane. An 850 pound biplane with a Glenn Curtiss engine would be used for the Rose Festival stunt. For take off a 175 foot long, 30 foot wide platform was constructed on the roof of the 120 foot tall hotel.

Aviation science took another stride toward perfection yesterday afternoon when Silas Christofferson, the youthful Portland bird-man, successfully piloted his biplane from the top of the Multnomah Hotel building to Vancouver, Wash. He flew the eight miles, crossing the Willamette and Columbia rivers, in 12 minutes.

Other aviators have made speedier journeys, but it remained for the unlicensed ex-automobile racer to be the pioneer in trusting his heavier-than-air machine in a start from the midst of the business section of a great city.

A crowd of 50,000, scattered along half a dozen streets, lining roofs of dozens of office buildings, and perched precariously at every available point of vantage, witnessed the splendid start of the daring young aviator.

The crowd roared as the machine gracefully and surely left its board footing and soared forth on its journey to Vancouver.