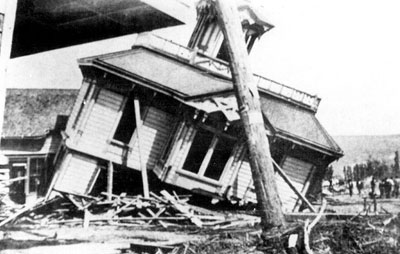 The name “Willow Creek” sounds innocent enough, and usually in June the stream is merely ankle deep as it meanders through the town of Heppner, Oregon. But on June 14, 1903 thunderstorms in the surrounding rolling hills fed the trickle until it became a raging torrent.

An ominous roar–not thunder, not wind, a grinding, terrifying roar– the likes of which the community had never heard before; a swirling, crashing, breaking and tearing, an onrush of leaping, darting and tearing, crushing tumbling wall of water. shrieks of terror, screams, moans and anguished prayers in an indescribable pandemonium–and the dead and dying were buried beneath water and mud and debris, and strewn in the underbrush at the edge of a flood for two miles down Willow Creek. The destruction continued one awful hour.

A cloudburst about one mile south of the city had piled up a wall of water 200 yards wide–to sweep without warning down the narrow gorge, leaving death and destruction in its path (The East Oregonian, June 12, 1953 – via Heppner Chamber of Commerce).

247 people were killed in the flood. Two-thirds of the houses were destroyed. Less severe floods have occurred since 1903, and in the early 80s the Willow Creek Dam was built to mitigate the possibility of future floods.