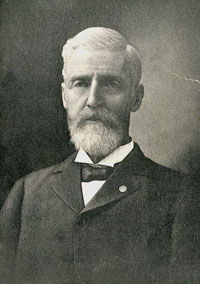 Originally from Ohio, Thompson traveled west to the Oregon Territory as a sheep herder at 19. He worked as a laborer and surveyor until the outbreak of the Civil War. He enlisted and attained the rank of captain (though his First Oregon Calvary never actually saw action during the war). Soon after the war Thompson entered politics.

During his political career he served in the Oregon State Senate (both as a Republican and Democrat), spent time as the governor of the Idaho Territory, and spent two terms as the Portland’s mayor. Briefly he served as the U.S. minister to the Ottoman Empire. In civic affairs he presided over both the Oregon Humane Society and the Portland Public Library as president.

He is most remembered, however, for a donation to the city of Portland: the Thompson Elk fountain, which you can see today in the middle of SW Main between 4th and 5th.