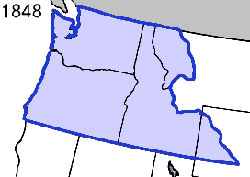 The Oregon Treaty, which established the border between British held Canada and the United States of America, was ratified by the U.S. Senate on June 18, 1846.

Negotiated by the James K. Polk administration, some American interests (including the Polk presidential campaign in 1844) demanded the border be established at 54° 40′, but the end result was the 49th parallel. Neither the British nor the USA had the stomach, at the moment, for more war.