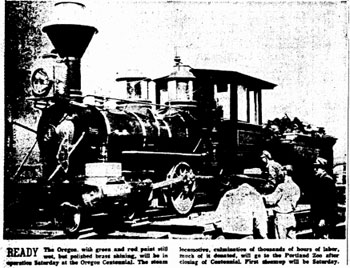 The Oregon Zoo steam engine Oregon was completed and delivered on June 19, 1959.

But she wasn’t ready for the zoo just yet. Her first stop was the Oregon Centennial Exposition and International Trade Fair (The Oregonian, 20-June-1959).

The prettiest little steam locomotive anywhere, its red and green paint and polished brass sparkling in the sunshine, was revealed to the world Friday for the first time and will begin hauling passengers at the Centennial Exposition Saturday.

It’s the third train of the famed Portland Zoo Line, and judging by the first ecstatic remarks of Friday morning viewers, it’s going to be a great favorite.

The mini-locomotive has 9″ by 12″ cylinders, 30″ diameter driving wheels, and operates at a maximum steam pressure of 170 psi. The tender carries 150 gallons of fuel oil and 400 gallons of water. She was moved to the Zoo after the Centennial Expo closed in September of 1959, where she remains in service to this day.