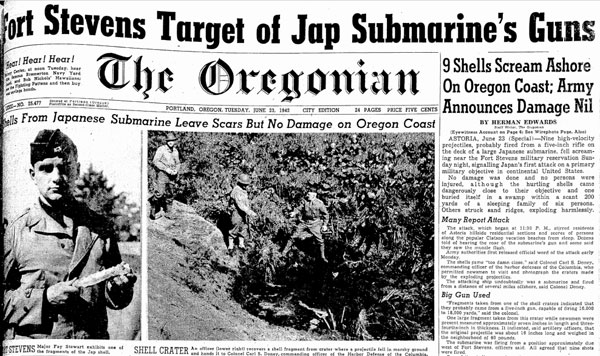 In the first attack on a primary military objective in the continental United States, a Japanese submarine fired shells at Fort Stevens, at the mouth of the Columbia river, on June 21, 1942. (The Oregonian, 23-June-1942).

The attack, which began at 11:30 P. M., stirred residents of Astoria hillside residential sections and scores of persons along the popular Clatsop vacation beaches from sleep. Dozens told of hearing the roar of the submarine’s gun and some said they saw the muzzle flash . . .

The shells came “too damn close,” said Colonel Carl S. Doney, commanding officer of the harbor defense of the Columbia, who permitted newsmen to visit and photograph the craters made by the exploding projectiles.

The attacking ship undoubtedly was a submarine and fired from a distance of several miles offshore, said Colonel Doney.

Seventeen shells were fired, but they caused little damage and no lives were lost.