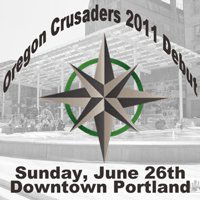 The Oregon Crusaders are Oregon’s only drum and bugle corps. They’ve got a long, trophy strewn, history, and are starting up their 2011 season.

I had no idea “drum and bugle corps” was a thing, except Heather tells me she used to be play in one in her younger days, and last year (or maybe in 2009?) at the halftime of a Timbers game we saw the Oregon Crusaders perform. I tried to find a YouTube video that would do them justice, but there aren’t any that really convey how impressive, and loud, a live performance can be. So if you’re downtown on Sunday, check them out – the show is free, and starts at 5pm.