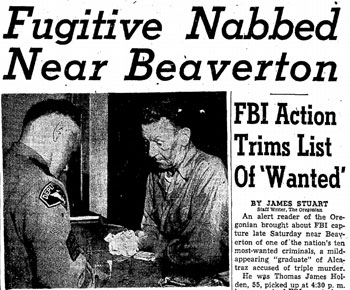 At the top of the FBI’s very first Ten Most Wanted was one Thomas James Holden, triple murderer, armed and considered extremely dangerous (The Oregonian, 15-March-1950).

Holden is accused of climaxing a long career in crime by slaying his wife Lillian and her two brothers June 5, 1949, in an apartment on Chicago’s west side.

He was charged with murder on the day of the killings and five days later was seen in the vicinity of Cedar Lake, Ind. With this evidence of his flight from Illinois, the Chicago police department sought FBI aid.

But on June 23, 1951, Holden was nabbed near Beaverton, Oregon by Portland Division FBI agents.

The Oregonian reported details the next day:

An alert reader of the Oregonian brought about FBI capture late Saturday near Beaverton of one of the nation’s ten most-wanted criminals, a mild-appearing “graduate” of Alcatraz accused of triple murder.

He was Thomas James Holden, 55, picked up at 4:30 p. m. by a squad of FBI agents in a house two miles southeast of Beaverton on Scholls Ferry road. When arrested, Holden was working in the unoccupied house as a plasterer for the Cascade Concrete Products company.