This guest post is by Rick from Beerdrinker.org – follow him on Twitter too: @m8ryx. I had to miss my first NAOBF ever, but Rick graciously offered to share his reviews and recommendations with me, and Dave Knows readers! 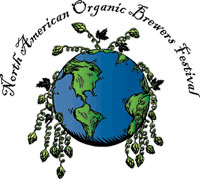 A gorgeous Portland early summer day made Overlook Park the place to be in Portland Friday, with a great selection of organic beers at the 2011 North American Organic Brewers Festival. Unsurprisingly, the selection was mostly ales, with one or two lagers available and a cider. There seemed to be fewer brewers in attendance this year, with the international section notably absent, as well as a dedicated space for ciders. There seemed to be more fruit/adjunct beers, which is where I chose to focus my tasting. Arriving before 2, it felt a little early in the day to have my face melted off by a mega-hopped IPA, and I’d already had a number of what was available.

I holed up at my preferred spot, a table near the tree, fairly distant from the beer and stage, but a quick jaunt to the port-o-lets. The music was generally good, not too loud, leaning towards coffee house earlier in the day, and getting a bit more rock towards the evening. The crowds never became a factor in my beer selection, as lines had not formed by the time my tokens ran out sometime between five and six. In the past I would switch to the 2-token selections when lines grew, but fortunately they didn’t since I couldn’t find any 2-token beers.

Some of Rick’s reviews and recommendations: