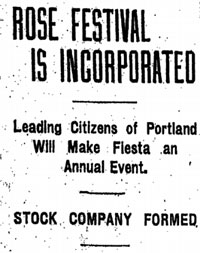 At the tail end of the very first Portland Rose Festival, organizers agreed the successful event should be celebrated annually. On June 27, 1907 they filed articles of incorporation with the Oregon Secretary of state (Morning Oregonian, 28-June-1907).

The articles provide for an annual carnival to be held in June of each year and designates in a general way the nature of the programme . . .

Article 1 designates the name as the Portland Rose Festival and article 2 provides that the duration of the organization shall be perpetual.

The festival has taken place every year since, except in 1918 (due to World War I) and 1926 (due to Multnomah Stadium construction – the location was where many events took place or were staged). In 1942 the parade was cancelled to heed federal government warnings to cancel large outdoor events due to the possibility of enemy attack. Other activities that year, however, were held indoors.