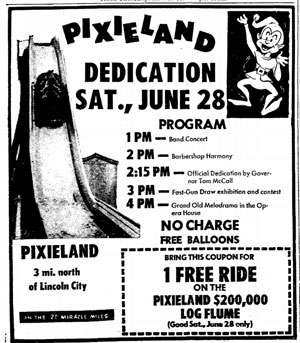 Pixieland was a short-lived amusement park on the coast inspired by a longstanding destination restaurant in Lincoln City called The Pixie Kitchen. The whimsical restaurant, with a funhouse mirrors entryway and an internal courtyard occupied by colorful mechanical pixie characters, opened in the 1930s and closed in the mid-80s.

The amusement park had a much shorter life span.

It opened in 1969 – officially dedicated by Governor Tom McCall on Saturday, June 28, 1969 – and closed in the early 70s (and now its remnants are disappearing into reclaimed wetlands).

To get a glimpse of what Pixieland was like, check out the wonderful collection of images at PdxHistory.com, and next time you visit the Central Coast plan a stop at the North Lincoln County Historical Museum, which sports a permanent display about Pixieland.

Also recently the purchase of a Pixieland T-shirt from Vintage Roadside evoked my own Pixieland memories . . .