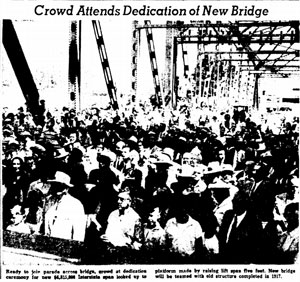 On Tuesday July 1, 1958 the new Interstate Bridge span opened to traffic for the first time (The Oregonian, 2-July-2011). The original span, opened in 1917, was closed the same day for remodeling (the remodeled old bridge would eventually match the new bridge in virtually every detail – except it’s 2 feet narrower).

The dedication ceremony harked back to the 1917 dedication:

The same pair, matronly now and 41 years older, untied the bow that opened the new $6,815,000 span which will be teamed as a one-way couplet with the old bridge to form a metropolitan link between Oregon and Washington meeting modern highway standards.

During the remodeling of the old span the new span served traffic in both directions. The original span now carries traffic northbound and traffic flows south on the newer, 1958, span.