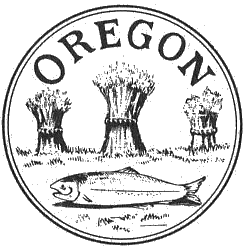 A series of meetings at Champoeg were held in the early 1840s by Oregon Country pioneers attempting to work out collective solutions to problems such as wolves, crime, and inheritance.

Interest in self-government grew, and on May 2, 1843 the Provisional Government of Oregon was established. A government isn’t worth much without laws, so a provisional government committee met to address the issue. On July 4, 1843 they had their draft of the de facto first Oregon Constitution, and on July 5, 1843 those Organic Laws of Oregon were adopted by popular vote.