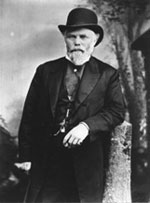 But it wasn’t until eight months later, after Oregon was granted statehood on February 14, 1859, that he assumed office.

Just in time for the Civil War.

His pro-slavery position alienated him from a substantial number of the citizens of Oregon at the outbreak of the Civil War. Whiteaker was vilified as a traitor, but continued to serve until the end of his term in September 1862. As governor he urged development of home industries, citing soap, socks and pickles as products Oregonians could make for themselves. His frequent nickname was “Honest John,” but was also known as “Old Soap, Socks and Pickles.”

He did not run for reelection when his term expired in 1862, but remained in politics. He served in the Oregon legislature and senate, reached the U.S. Congress, and was appointed tax collector in Oregon in 1885, the position from which he retired in 1889. He died in 1902.