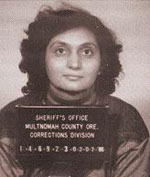 Ma Anand Sheela, president of the Rajneesh Foundation International and the personal assistant to Bhagwan Shree Rajneesh, purchased the 64,000 acre Big Muddy Ranch near the town of Antelope in Central Oregon on July 10, 1981.

The Rashneeshees renamed the place Rancho Rajneesh. The Bhagwan and thousands of his followers moved to the veritable town constructed by the sect’s members.

Very quickly the group’s leaders – including Sheela – became embroiled in a litany of controversies, and were accused of and ultimately convicted of various crimes (including poisoning the citizens of The Dalles, Oregon so that they’d stay home on election day). The commune collapsed in 1985.